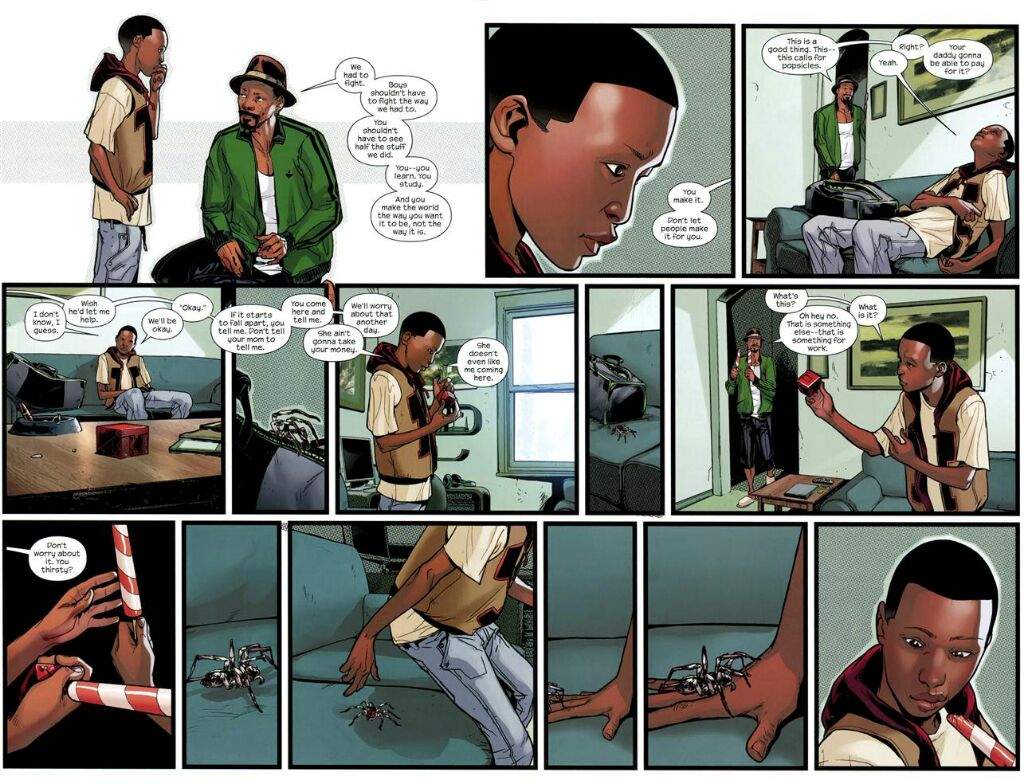 Norman Osborn was arrested and revealed as Green Goblin. Two months before Peter Parker's death, a thief broke into Osborn Industries. The thief didn't know about an Oz formula spider crawling into his bag. Miles Morales lived in Brooklyn and against his parents wishe, he visited his uncle Aaron Davis who had a criminal past. At his uncle's apartment he was bitten by the same Oz formula spider from early. Miles found out he had super-human ablities. He then revealed his power to his best friend. They came to the coclusion he had similar power that of Spider-man such as wall-crawling. Miles didn't want these powers he just wanted to be normal. He decided not to be a hero. A couple o fmonths later Spider-Man died saving his family from The Green Goblin. Miles was too late. He knew he could've saved him. He was struck with grief. Miles then decided to live by Peter Parker's philosophy, the whole "With great power comes great responsibility. And become his version of Spider-Man. Miles was then confronted by Spider-Women who demanded to know who this Spider-man was. He was captured and revealed his origin to Nick Fury at S.H.I.E.L.D's headquarters. During this Electro broke out and The Ultimates started to fight Electro with the help of Miles which was very important. When they won Spider-Women rewarded her approval for Miles to become the new Spider-Man.

Miles Morales powers are that similar to Peter Parker's Spider-man but Miles has some new powers all given to his by the Oz-formula spider.