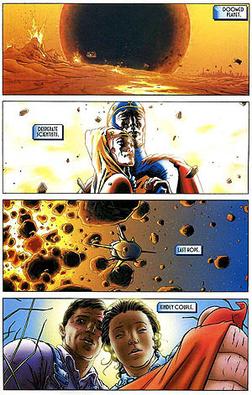 A planet called Krypton was dying. So a couple of Jor-El and Lara foresaw the destruction of Krypton. They decided to send their only baby boy Kal-El to Earth in order to survive. The Ship would land in Smallville, Kansas. Where Johnathon and Martha Kent would find him and raise him as their own. Renamed Clark he would discover he had extraordinary powers beyond any human. He knew he had a purpose on why he was sent to Earth. He was sent to protect the world and keep it safe from any danger. He would be come Superman.

Superman has these amazing powers due to the yellow sun radiation exposure gives any Kryptonian these powers. A Blue sun can give him new and different powers also it enhances the powers he already has. The red sun doesn't have the radiation he needs to be powerful. It would just make him a normal human.